One year and one day ago, a nice lady called Elaine pulled up to my building in her RSPCA rabbit van and took out a little cat in a cage. She handed the cat to me to take upstairs, came up shortly after me, met my mother just inside my flat’s front door cooing over the cat (who had just started to purr when stroked through the bars) and gave my hall a cursory glance before declaring it a fit home for an adoptee. “You can just tell.” In fact, we had to persuade her to stay around for more than a minute or two after I’d signed the adoption papers. (So much for all the frantic tidying my mother had helped with for the hours beforehand.) Elaine reassured me that she’d brought food and a litter tray so that I could take the cat immediately, and that there was no hurry to pay the adoption fee.

In retrospect, perhaps some of the above should have been alarming.

This was the beginning of the agreed trial week with my two-year-old tortoiseshell-and-white domestic shorthair, General Clawsewitz, née Cleo. I noted the date. It was the 13th of April 2014, a Sunday. 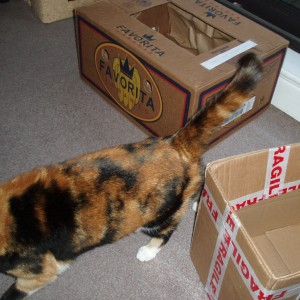 The first photograph of Clawsewitz in her… I mean MY home

Clawsewitz, when let out of her carrier in the living room, checked the perimeter as cats will do in an unfamiliar place and promptly retreated under the sofa. This lasted until Elaine left. After leaving Clawsewitz a few minutes to let her decompress, I threw a Whiskas Chicken and Cheese Temptation under the sofa.

And that was the end of the shyness.

It didn’t take the full week before General Clawsewitz decided to stay. I’d booked a couple of days off work to settle her in, but they were scheduled for two days after the RSPCA dropped her round… two days early. (Again, maybe some of this should have been a warning sign.) I was worried about leaving her alone after only being acquainted for the latter half of Sunday, and called home from work on Monday to talk to her on the answering machine.

I was expecting to take charge of a miserable, potentially abused cat. Her body language in her mugshots on the website had been closed and unhappy. She had been in shelters for three months and an attempt at fostering her was unsuccessful because she wouldn’t suffer other cats to exist in her vicinity. She had found one home, only to be returned within a day by the woman who claimed Clawsewitz had given her “asthma” (probably allergies). I was quite fired up to coax a frightened little girl out of her shell. 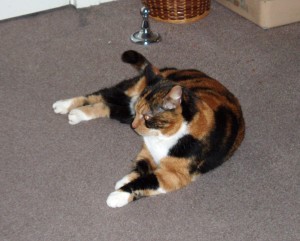 Clawsewitz, just after she emerged from under the sofa and explored her living room

What I’d neglected to consider was that this was a tortoiseshell, the boldest and in-chargest of cats (“naughty tortie,” my vet friends knowingly remark), and that she was quite capable of ordering her own acclimatisation process. Plans to keep her in one room for a day or two, so’s not to overwhelm her, quickly surrendered to reality when she walked up to the door to the landing and, with the clearest body language, requested its opening.

Clawsewitz explored at her own accelerated pace, followed me and/or the treats around and stuck very close for the first week – even sleeping on my bed, something that died off in due course after she realised she didn’t have to leave, and is only recently coming back as she starts to grow closer to me at her own pace.

Three months in, Clawsewitz helped me write to the RSPCA to let them know how she was getting on.

Clawsewitz directed me in learning to stroke her correctly. She required me to sleep with one outflung arm so that she could tuck herself against it, pillow her head on my hand and have gentle strokes up her eyebrow lines. She stuck to this arm’s-length routine for most of a year, and I’d concluded she simply didn’t like being any closer, so it was a surprise a month or so ago when, apparently overnight, she suddenly invented sleeping on top of me. I quite simply woke up one morning to a cat curled on top of me and managed not to scare her off, which has prompted her to repeat the process many times no matter upon which side or back I happen to be sleeping, which I think is wonderfully clever and which my family could probably do without hearing about quite so often, thank you. 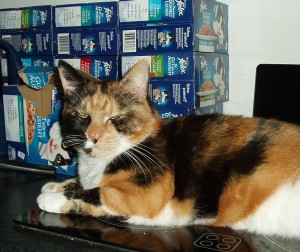 Lest I forget, she point blank refused the cheap Sainsbury tinned cat food she’d had at the shelter, picked at it with preternatural pathos, and held out for Felix pouches.

This leads us up to the present day, and last night, the 13th April 2015: Clawsewitz’s adoptiversary and official state birthday. A cat-safe birthday party was thrown for the new three-year-old, with just two invited guests (my mum and brother, the latter of which didn’t make it) and low-key, cat-friendly proceedings. The humans had a meal of pasta, peas, sweetcorn and vegetarian sausage balls cooked by me; Clawsewitz’s visitor was well-behaved and spent most of the time measuring and sketching for one of the home projects she wants to do to the flat, outwardly ignoring Clawsewitz, who was unperturbed and approached her curiously as a result. Herm’s family is cat-savvy.

The cat had a ‘party game’ consisting of several of an extremely favoured brand of treat (Dreeeeamiiiies!) scattered underneath a tea towel laid out on the floor. This, alas, defeated Clawsewitz’s gigantic brainpower and she came to beg me for help so often that in the end I had to hold the towel up in a sort of tunnel configuration or she never would have managed to get under it. She is a bright cat. After that challenging mental exercise, she had her birthday meal of freshly defrosted tuna and ham. When Clawsewitz eats ham slices, she expects me to hold them up so she can tear strips off them. Distasteful as this is to a vegetarian, if I don’t do this, she drags them out of the bowl and deconstructs them on the carpet, which I don’t find ideal. Hands are easier to wash than carpets, quite frankly.

After a short television break to watch her gerbils, Clawsewitz retired to her radiator cradle and adopted a series of utterly ridiculous poses, which we were obliged to photograph in between eating banana slices with apple-mango yoghurt and cream. These photographs will be inflicted on you all as soon as Mum works out how to get them into Dropbox.

In what we thought was a neat bookend to the first year, Clawsewitz’s number one visitor (she finds human names and faces too hard to remember, so just numbers them) was present the day Clawsewitz took possession of her home and again yesterday on her birthiversary… not counting plenty of visits in between.

That trial week I mentioned? Well, I paid the adoption fee before it was up, so they don’t want her back, and the week’s been being sort of informally extended ever since. I’ve been stringing Clawsewitz along all year telling her it’ll be up at any moment and she will be sent back to the place she refers to as “the gulag” (Bolton cattery). Yesterday I told her her time was up and informed her that she could live with me forever if she wants. Her response… 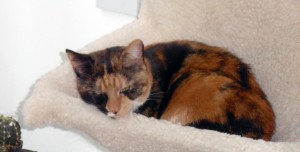 I think that’s a yes. But it could also be “I’ll have my treats now”.

Worlds Built Cheap
View all posts by Herm →
This entry was posted in cats. Bookmark the permalink.